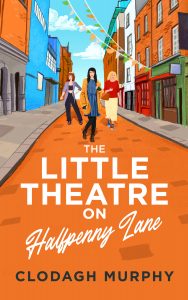 The show must go on …

Aoife and her sisters know exactly what to do when they inherit their Great-aunt Detta’s theatre on Halfpenny Lane:

But they didn’t count on Detta leaving a share in the theatre to her godson, Jonathan. Now they’ll have to persuade him to buy into their vision of stardust and magic – or find the money to buy him out.

As they fight to save the theatre, Aoife also battles her growing feelings for Jonathan. Because she can’t let herself fall for the man who’s threatening to bring the curtain down on their dreams.