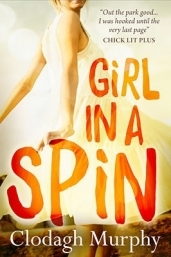 Jenny Hannigan might be a good-time party girl, but all she secretly craves is a family of her own and a life of domestic bliss.

So when she falls in love with handsome politician Richard Allam, she thinks she’s found exactly what she’s looking for. Leader of his party and poised to become the next Prime Minister, Richard seems to embody the security and stability she’s never had.

However, Jenny’s troubled background and flirty, fun-loving nature don’t make her an ideal candidate for the role of Prime Minister’s wife — unlike Richard’s ex, the impeccably pedigreed Julia. So Richard’s spin doctor, Dev Tennant, is given the job of managing her public image in the run-up to the election.

But as the election campaign gathers momentum, Dev discovers that Jenny has more than a few skeletons in her closet, and he’s working overtime trying to keep them there.

As her life starts to spin out of control, will Jenny discover that she’s been looking for her happy ending in all the wrong places?